SATURDAY CLINIC – Pickleball 101– 1 hour class starting at 11:00a – FREE CLINIC for Members/$15 guest fee nonmembers (no additional cost) – max 16 – a beginner’s introduction to Pickleball!  Here you will be taught the basic rules and flow of a pickleball game as well as the fundamental skills you will need to get started.  Great for new and beginner players learning and developing their game.

For all other Pickleball questions, you can contact the Director of Pickleball
Michael Kinnear at mkinnear@ashevilleracquetclub.com ***You MUST use Playtime Scheduler (https://playtimescheduler.com/) to sign up prior to participating in all sessions except Pickleball 101 (register for these with the front desk 828-274-3361). You can reserve indoor and outdoor courts up to 3 days ahead of time as members by calling the front desk. Additional charges of $20/hour apply to indoor courts split between up to 6 players per court. Outdoor sessions do not automatically move indoors in the event of rain or inclement weather but watch your email as we will notify if sessions move indoors and the cost. Pickleball is included for Pickleball members, Gold, and Platinum members at ARC. Silver members and non-members must pay a $15 guest fee and are limited to 3 visits per year. If courts reserved for programs above are not fully utilized, members may use them on a first come first serve basis.

ARC’s Pickleball Director is available for private lessons and clinics. For any questions about private lessons, please contact Michael at mkinnear@ashevilleracquetclub.com 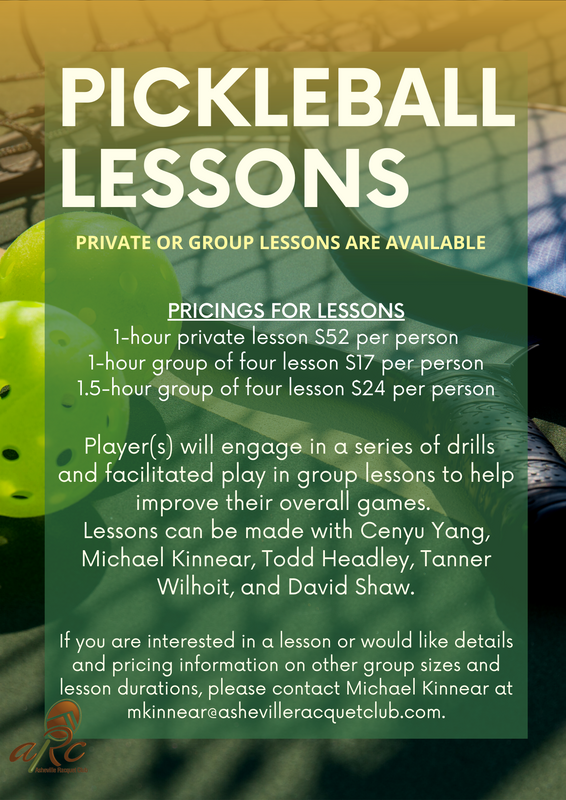 Women’s and Men’s Doubles – you will play with the same partner throughout the league duration. Leagues are open to ARC members only.

No substitutions (with the lowest scores being dropped, you can miss up to one week without penalty)
The first 4 weeks are a round-robin against each other team in your bracket

Week 5 is a double elimination tournament seeded by round-robin performance. Your team’s best 3 weeks will be counted towards seeding meaning you can either drop your worst week or miss a week without penalty.

Warmups are 15 minutes at the beginning of each session

5 team limit for each bracket

The winning team from each bracket will receive a free 1.5-hour lesson with both Cenyu Yang and Michael Kinnear

ARC is offering a pickleball ONLY membership for individuals and for families.  You can also upgrade to our Gold membership to have access to other areas in the facility. Upgrading would give you access to Pickleball, as well as our fitness facilities (including our group fitness classes) and pools at both ARC locations.

If you are interested in learning more about these membership opportunities, please reach out to our ARC Sales Team:

Interested in learning more about our upcoming Pickleball programming or in taking lessons?

Please fill out the following information and one of our Membership Consultants will contact you to reserve a complimentary three day pass.

Hit enter to search or ESC to close